What is Deformable Generator?

The deformable generator model is a deep generative model which disentangles the appearance and geometric information for both image and video data in purely unsupervised manner. The attributes of the visual data can be summarized as appearance (mainly including color, illumination, identity or category) and geometry (mainly including viewing angle and shape).

Visualizing the generated deformable fields, which discribe the basic geometric attribute (such as viewing angles and shapes), overlapped on the generated digit images.

The deformable generator model finds its root in the Active Appearance Models (AAM) which separately learn the appearance and geometric information. Particularly, AAM utilizes linear model, i.e. principal component analysis (PCA), for jointly capturing the appearance and shape variation in an image. Unlike the AAM method which requires hand-annotated facial landmarks to model the shape for each training image, the deformable generator model is purely unsupervised and learns from images or videos alone. 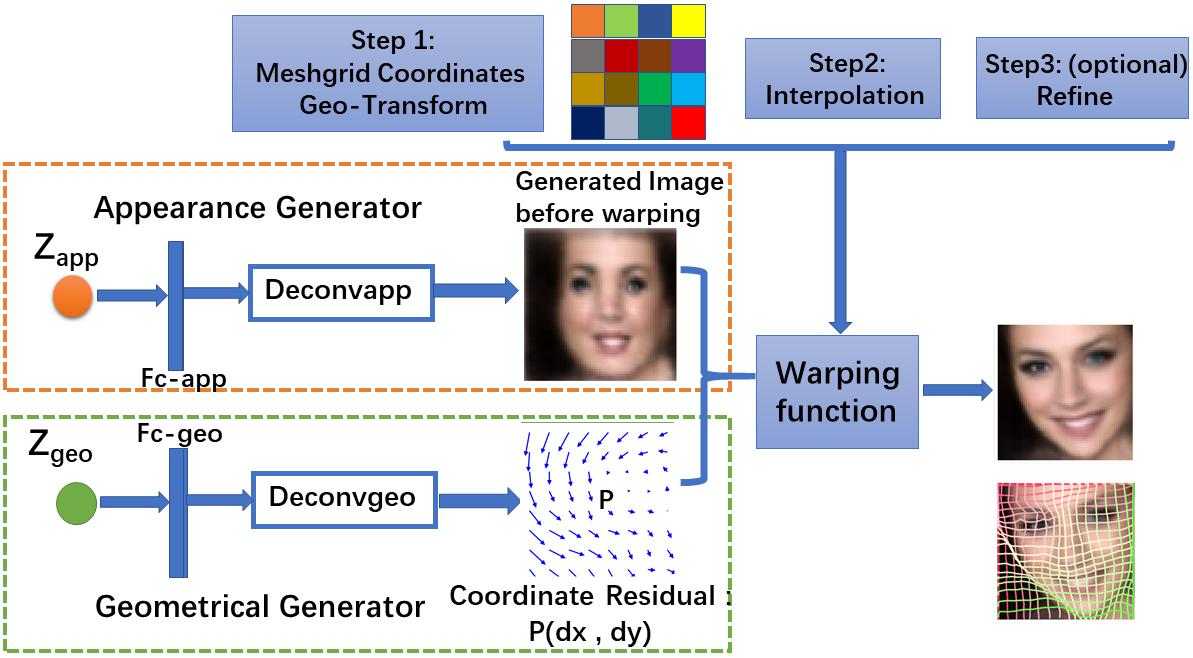 An illustration of the proposed model

The model can be expressed as

Experiment 1: Learn the disentangled basis functions for appearance and geometry

Unsupervised landmark localization. Row 1: the samples of the testing images from the MAFL dataset. Row 2: the deformation grid estimated from warping the the canonical grid with the coordinate displacement (deformation fields) learned from the geometric generator. Row 3: the canonical grid overlapped on the canonical faces learned from the appearance generator. Row 4: the semantic landmark locations. The green points denote the ground truth, and the red points denote the predictions.

Experiment 3: Learn to transfer the appearance and geometric knowledge

On each row, we set to be one of the discrete label, while interpolating one dimension of the geometric latent factor from with a uniform step . The first column represent the images generated by the one-hot (before warping by the deformable fields generated by ), and the remain 10 columns show the results by interpolating the shape or the view factor of .

Experiment 5: Learn to transfer and combine the dynamical appearance and geometric knowledge

Transfer and recombine the appearance and geometric information from different video sequences.